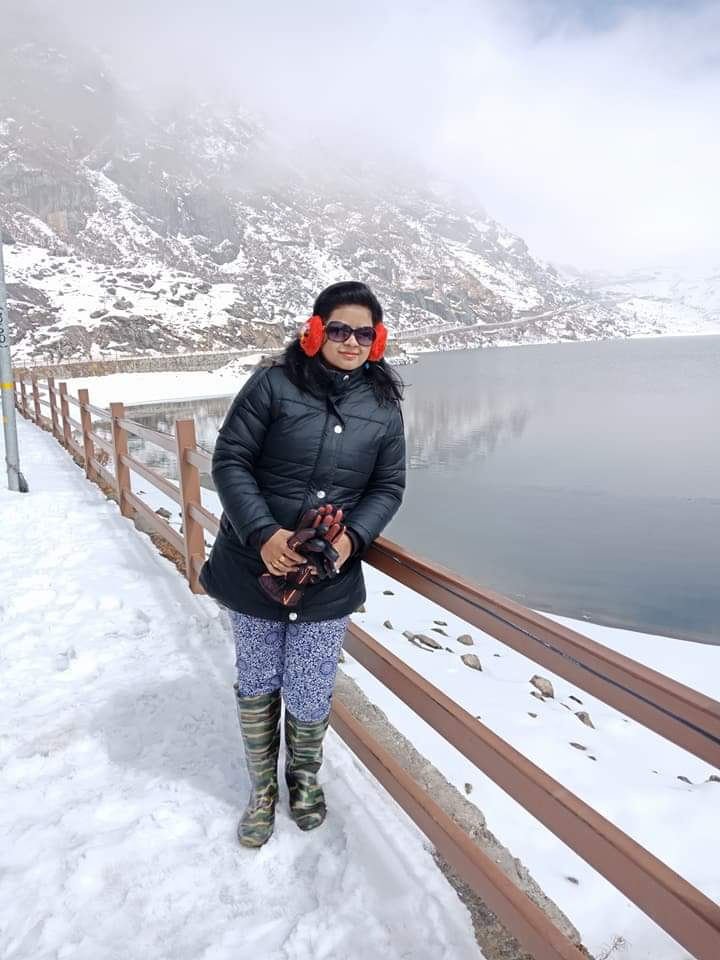 Tsomgo Lake is a glacial lake in the East Sikkim district. its a beautiful place to visit. the distance of lake from Gangtok is 40 kilometers. The lake remains frozen in winters and the scene of the lake seems beautiful that time. It can’t be expressed through words. if anyone wants to visit Tsomgo lake than the article is useful for them. the surface of the lake changes its colours with the change of the season  and its seems amazingly beautiful to feel and to be there. Buddist monks progonsticated after studying the changing colours of the lake. 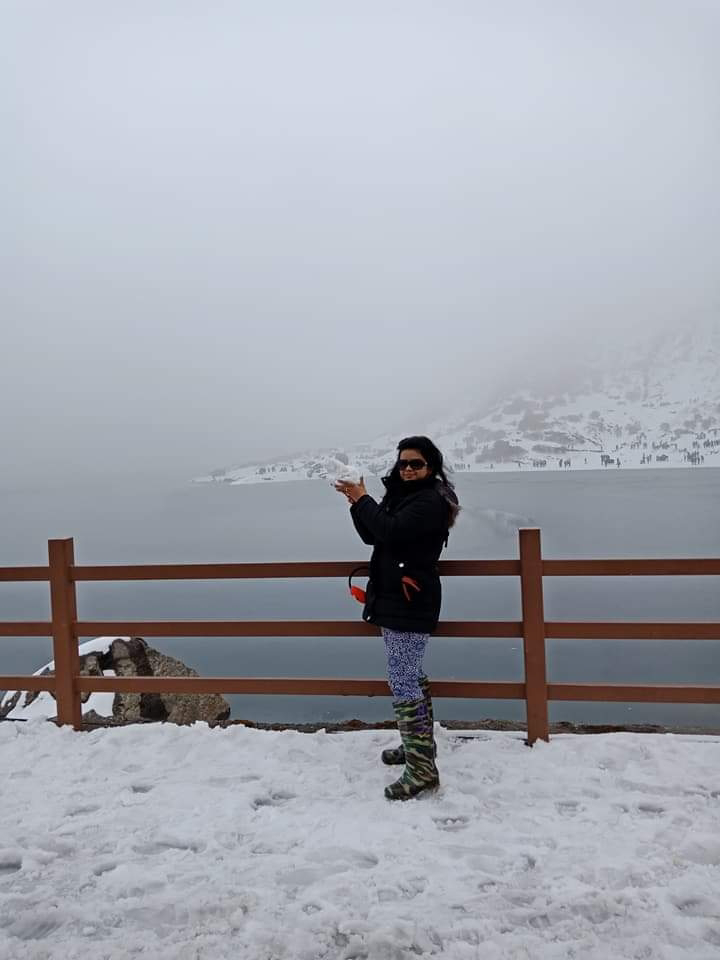 Meaning of the name Tsomgo

In Bhutia language Tsomgo is made of two words Tso means lake and Mgo means head whis means the source of the lake.

How to reach Tsomgo Lake 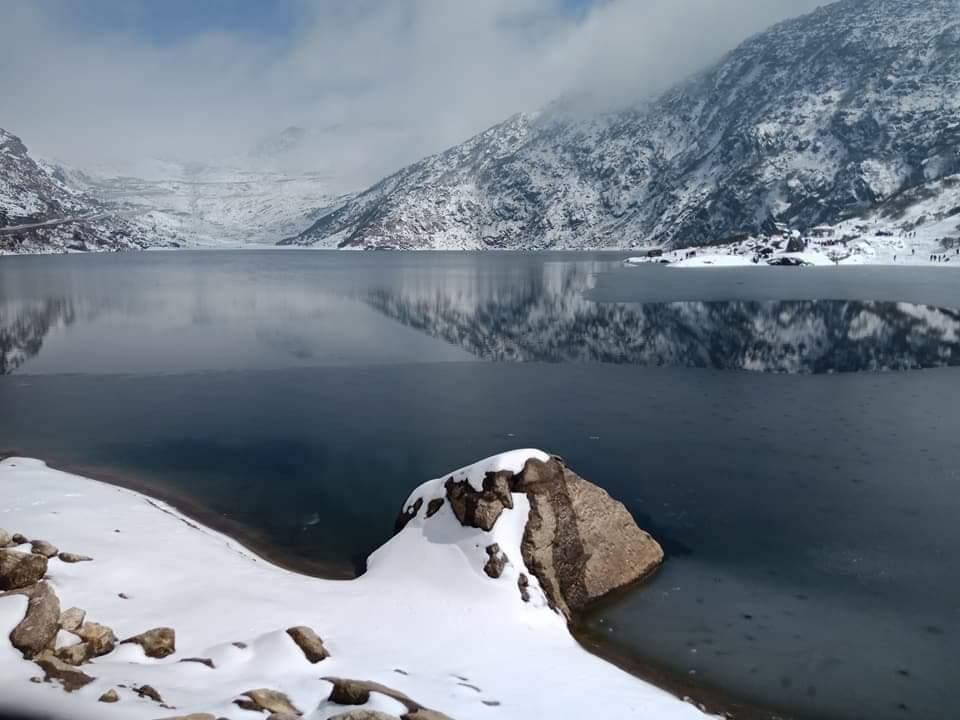 The lake is situated in a restricted area so without permission you can not go there. We reached Gangtok from Darjeeling by road. There are many options to reach to Gangtok. If you are going first time then you should know about this because when we were collecting information about how to reach Gangtok via Darjeeling, google is showing big distance via train also. As we have our short trip so we were about to cancelled our trip to Gangtok than my brother who lives near Darjeeling, tells us there are many option to go Gangtok. There are option of sharing / individual taxi and it will drop you to your location. We were new there and for safety purpose we opted shared taxi as there around 6 to 8 other people also going in that vehicle, than we started our journey from Darjeeling to Gangtok . The scenery of natural beauty was amazing through the way. You will surely reach there without realizing the distance. When we reached Gangtok after few hours journey, we had pre booking in hotel, you can search hotels after reaching there, many of hotels are there near taxi stand.  After taking rest we moved to visit Gangtok and it’s really amazing. We hired a local taxi there, we visit some view points and temples also. Than our driver told us about Tsomgo Lake and we were amazed to hear about the Lake but I was really worried for my one and half year daughter because at lake there were minus temperature but the driver assured  us about that. Finally we agreed to go and he called his friend about permission to go there. After visiting local sights full day we came back to our hotel and we were preparing to go next day. Suddenly the phone rings and it was the driver. He told us due to heavy snow fall all the ways of Tsomgo Lake are closed and he said there were very little possibilities as only in the morning he can tell us that we can go there or not. As rout was closed due to heavy snow fall since last 2 days. We can visit the lake but it will clear by morning only. Early morning my husband’s phone rings and that was the driver himself and he tells us rour is clear and we got permission to visit the Lake. Wow!! It was really amazing feeling. We got ready and reached down to the hotel our driver was waiting for us. Indian army is only authority, who control that area. To visit that place, you have to initiate request to visit by submitting IDs to local authorities via hotal or guide.  Army authority give permission on the basis of weather conditions and number of applications as maximum number of vehicle is restricted to visit at a time.

As the lake situated in restricted area, without army permission you can’t go there.

Luckily weather conditions and lesser number of visitors are in our favour so we got the permission to visit. 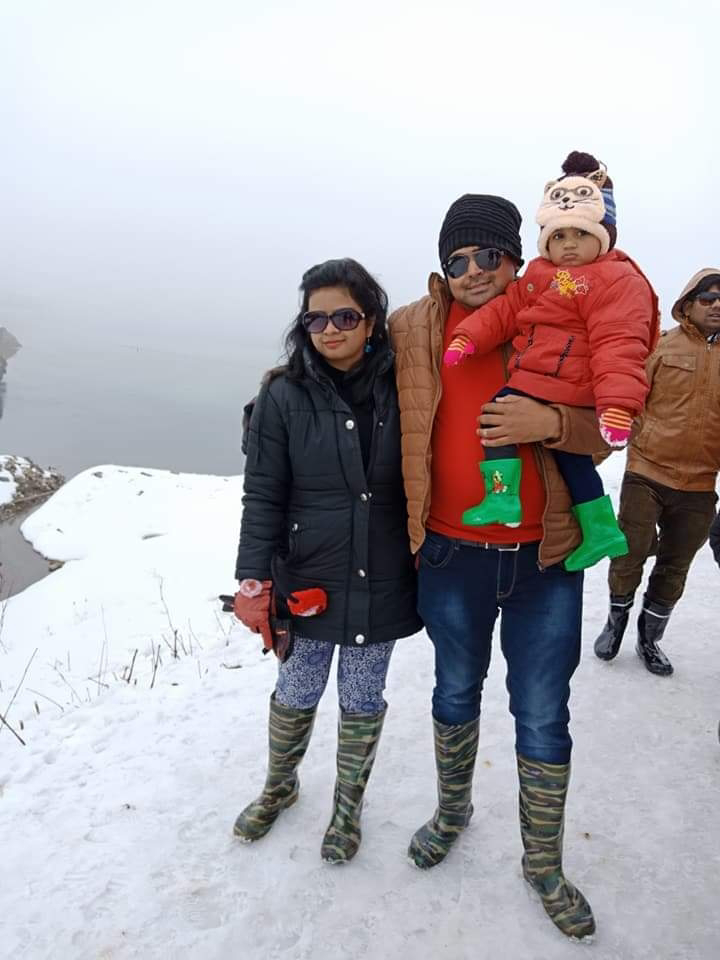 Our Journey to Tsomgo Lake 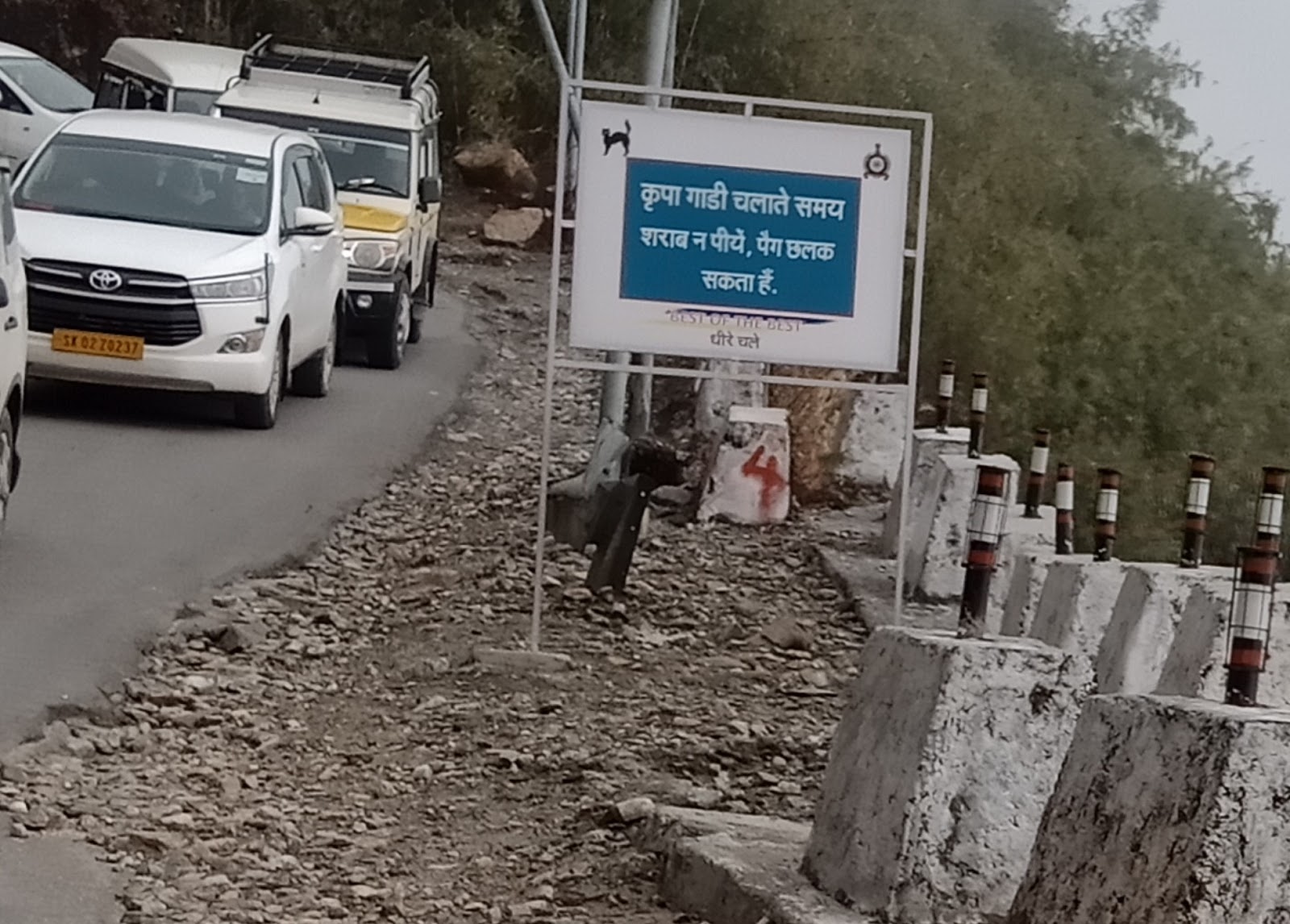 Our journey started and I began enquired with driver about the lake. I asked him how we got permission? He told us at night snowfall stopped that’s why we got permission. Reaching at some point there were a long queue of visitors who were going to the Lake. That was security check post. We were asked to show our original IDs which we were submitted at the time of application and after all the formalities our driver told us that another driver will take you to the destination because only heavy vehicals like Tata Sumo ,bolero and safari like vehicles can go further. That was really scary to hear about the roads. After roaming full day in his taxi he got our believe now going on a risky roads with a new driver is too much scary. We had no option and new driver gave us his introduction than we moved ahead. He was also very polite. He told us about the lake and whenever he saw a car is coming back through lake he shows us the snow which was on the cars. A feeling of excitement begins high and we moved ahead. 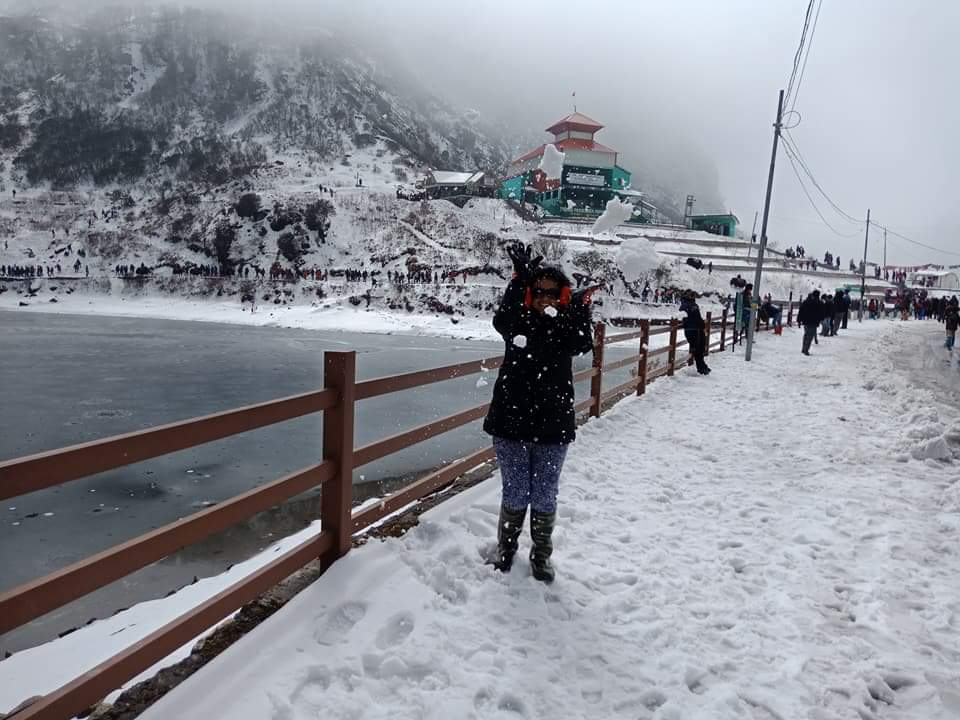 Journey of excitement and fear

We started our exciting journey. As we were going high on the road we can see snow on the roads and because it was melting it became slippery. I can see the car that is moving ahead  of us, the tires of the car was slipping due to melting snow. It was really scary to watch. But when you will see the beauty you will forget all. There were many  tea stalls also, you can take break anytime. We took a break and had tea with maggie and momos. It was delicious. We can had more but we have to reached to our destination so we moved ahead. Finally we reached to our destination. 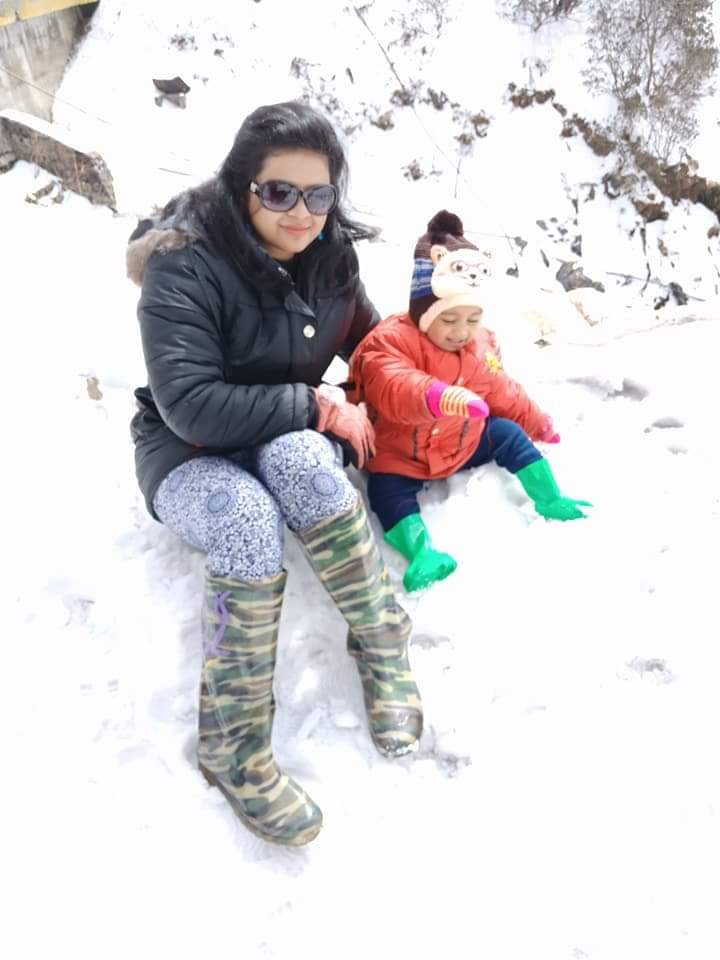 For describing the beauty of Tsomgo  lake my words are not enough. i can’t describe my wonderful feeling. There were snow all around. The lake was frozen that time. The area of the Lake is full of tourist. All tourist were enjoying at their best. That was first time when i was at any place of snow so i was super excited. My daughter was enjoying in snow. There were yak ride also. If anyone wants to ride on yak they can go as its totally safe. After enjoying for hours we decided to go back to hotel but we were lost in our memories of snow and the memories are still alive in my mind as if i am there now. some memories cant be vanished. Sharing my travel experience is so much delighting experience for me. 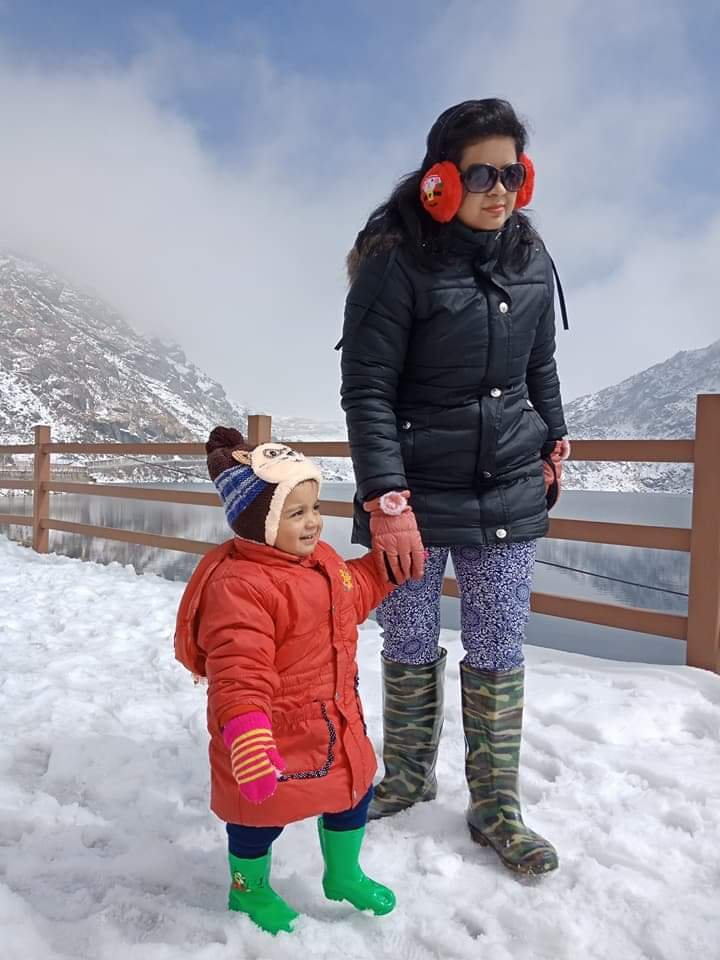 If you are looking for snow then October to March is the best time to visit Tsomgo Lake. During this time the lake and the surroundings are covered with snow. temperature can go as -20c . lake would be frozen that time but that’s the beauty of the place. 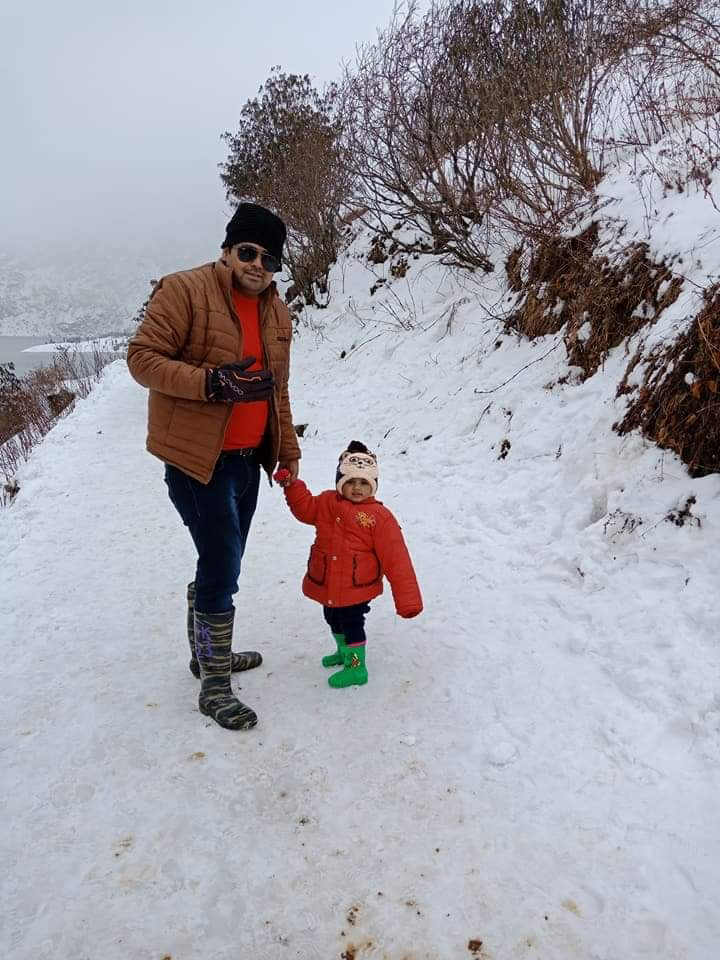 So, overall my experience to visit Tsomgo Lake is great and i would love to go again when i got chance to go. i have taken amazing picture there. If anyone planning to go there, believe me this is an amazing place and you will have more fun.

Stay tuned for my next blog..