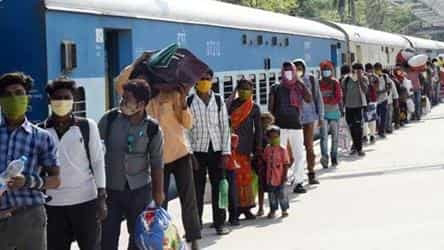 Had we ever thought that we will face this Panedemic situation?
Migrant workers are facing Toughest time for their survival.
factories and workplaces remains shut long due to lockdown imposed in countrywide.
Now They all are facing the problem of income shortage, food and uncertainty of future.
Some of migrant workers thinks if they died in this Pandemic, there is no one who can take care of their family so it’s better to go home.
Due to lockdown in country they don’t have any official transport facilities but their will power is really very strong so they began walking back to home.
Still thousand of migrants are not getting any kind of help. Some of them died also due to not getting food and road accidents also.
This situation is really very painful to see and hear also.
Later central government started some Shramik special trains to send them to their places, also some Persons/ NGOs/  help workers to get them reach safely to their places.
Till date most of the workers reached to their place or ankit to reach anyhow but
What I think is once all workers will be reached to their natives What they will earn and How to survive because they don’t have any work there too.
So the problem will be remain same for them. I have read in newspaper that UP government is working on beneficial steps for them by providing them special packages and even formation of a commission to take care about their earning confirmation on the theme of no worker would remain jobless in UP.
They will get work in their home town or maximum by with own state as per UP state government plan.
I hope people can get out of this situation and reach their home as soon as possible.
May be these steps will be followed by others states too for take care of their workers.
By these steps workers definitely gets relief but from here Problems would be start for those factories and workplaces, workers left far behind because once situation starts to became normal they need workers to run their factories and now there is no worker there.
Obviously they found shortage of workers there and now question would be raise to survival of those industries and the multi thousands of families associated with them, the owners and middle class families.
Though industrialist might found some solution by help of government or other sources but new challanges for middle class income group raised because till date there is no relief for them from nowhere. No is there to take care of this income group, no package announces from government to them. Even no direct or indirect relax for them by goverment.
Let see next what will happen to Middle Class Income group…..